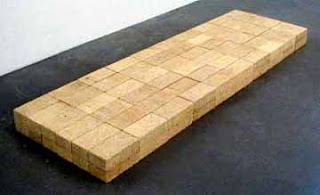 Today in my Object-Oriented meeting (we're preparing for an exhibition in early June in Vyner Street, Bethnal Green/Hackney) we were discussing some Michael Fried theses (in Art and Objecthood, haven't read yet). One of them is that genuine art pieces are gallery independent (yes, Duchamp doesn't figure high in his hit parade). I was wondering what would it mean to have an ontological equivalent of the thesis: genuine objects are subject (or actor) independent. And, in the back of my mind: is this a thesis that Harman would be willing to endorse?

Fried wants to preserve the intrinsic quality of the art work. Objects are often taken to need some intrinsicality to them - stripped off their relational properties (including the purely dispositional ones) and maybe left as just substrata, bare particulars. Fried wants to make sure that the gallery doesn't have the power to bring about (to instaurer, in Souriau's terms) a work of art. The ontological Fried thesis would rather be that (genuine) objects are not brought about. A weaker but more plausible thesis would be that they are not brought about bu humans. This thesis would however make objects human-relative. On the other hand, the stronger version seems to entail that objects either cannot exist or are very different from the way we normally think about them (being essences or substrata). Maybe, as in the discussion to do with art pieces, to talk about subject-independence could be just the wrong starting point.