All particulars could bear a name

May 04, 2012
Elisabeth Anscombe says that a particular is what bears a name. Surely, there are names that are not bore by particulars (think of the Morning Glory cloud in Australia or streams like El Niño or La Niña, those are likely to be types of event rather than particulars). Yet, things can be treated as particulars. In fact, any universal can be given a name or rather, as the nominalist would have, can be treated as a name. The nominalist gesture is to make an expression particular (typically a predicate) by treating it as a name. It is the name of various different things and of course that one name shares different bearers is no threat to the particular character of those bearers - a green leaf and a green lime just happen to bear the same name, "green". This connection between particulars and names is in fact playing a crucial role in Kripke's dismantling of descriptivism: Socrates is a rigid name bearer and, as such, he can afford not to be a philosopher - we can think of him beyond all descriptions and enable him to travel to different worlds where there is no philosophy but he still holds his name.

I take Anscombe's dictum to mean that a particular is what can bear a name. In fact, I was thinking, we give names to particular objects, to particular places and to particular times (rather eras or ages) but not to more than a very few of them. Events rarely bear names. We don't give names to our afternoons, to that tea in the company of dear friends, to this moment of contemplating the moon, to that (common) quale associated to a shade of green in the sea... Things that bear names are things that can be known by acquaintance. They have a particularity that can be grasped independently of their capacity to satisfy a description. To give a name to something is in fact to respect it beyond its descriptions - it is not an ugly, filthy, overweight limping dog, it is Atman, we hear. A name would give respectability to events, they will be singled out as unique - an identity beyond any discernibility considerations. 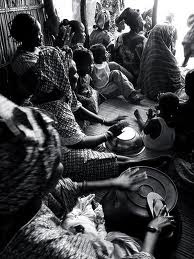 A metaphysics guided by name-giving would be very different from our current one obsessed with predication. A world where we guide ourselves by names and not by what each thing somehow is. (The old motto: "one thing is one thing and not another" would be in principle vindicated.) Our thinking would be more like navigating between particulars - maybe a version of a nominalist dream - rather than the effort to bring all Others to some common Same. Thinking would then be like orientating. Also, what is known by name can be known further, but no particular can be known but by heart.

The image is of a name-giving cerimony. Among the Wolofs.