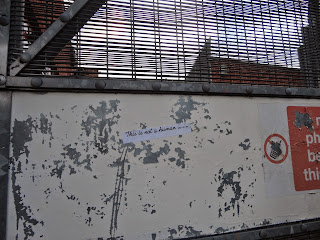 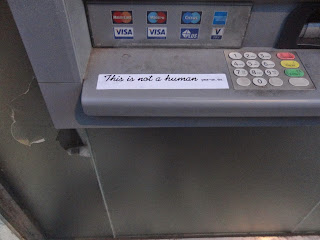 This is the action we're putting up to figure out how to use the word "human" these days. Can it ever had any meaning apart "those we have chosen"?

Posted by Hilan Bensusan at 08:12 2 comments: Links to this post

Aharon on search and rhythms

I'm working on my chapter about rhythms in Aharon's house and I'm doing a rhythmic piece with him about rhythmic transduction. It is about how knowledge can be understood in terms of entrainement, of the kind that
makes the heater in his room produce patterned marks in the wall. More about all this soon. Meanwhile, two links from Aharon.
The first is his piece on search art with Phil Jones:
Search Art
The second is his reflections on rhythms and gravity that illustrate beautifully his ideas about search:
Gravity In

Agamben on Esti and Esto: the two ontologies

In his beautiful and inspiring "Che cos'è il commando?" Agamben deals with archeological excavation as the source of all discovery: it is a Foucauldian thought, but he puts it in a way that makes me think that it can be extended to what has no starting point, no ground but layers of floors. In this sense, the excavation his on about is present both in archeological and in anarcheological endeavours. Agamben investigates these starting points - the question of ground. He starts out with archés, that are both commencement and commandment (commencer, commander, in French); the original element and the commanding force. He conjectures that to command is to start something out. Western philosophy, he says, never considered power in terms of command. Obedience has attracted more attention and indeed it is crucial, but authority really disappears only when commands are no longer given - there is likely always someone to obey any command provided that it is actually issued. He then attempts to analyze command - and starts out with the normative language. To approach it as something reducible to the descriptive language won't do. He turns to Benveniste's intuition that the imperative form of a word is its purest, archaic form. It was concocted to do something else with words, to relate to the world in one and not in the other direction of fit in Anscombe's shopper (see her Intention, p. 56 in the Oxford 1957 edition) - not like beliefs, in a descriptive way, but as desires, in an imperative way.

Agamben then introduces the idea that the west has always fiddled with two and not one ontology - the one of esti and the one esto (that would have the following Parmenidean formulation: esto gar einai). This is the ontology of the "let be". His take could be seen as comparable to Souriau's realism about prepositions - his existential pluralism. In any case, Agamben reckons that these two ontologies have been intertwined because they are distinct just because we separate out two poles - the user of language and the object of language - and two directions - the pole that acknowledges things and the pole that issues orders. The two directions of fit in Anscombe's vocabulary. The two directions of fit also bring about the difference between the natural - to be described - and the cultural - where interference and disagreement can take place. Agamben then makes some very interesting comments concerning how esto is prevalent today and how esti is put at its service. I read this in line with my thesis of the modern belief that Antropea could take off, leaving nature behind. The normative is gaining prevalence, but at the cost of loosing its bite as a power to start something out to become a mere instrument of control.

Posted by Hilan Bensusan at 09:47 No comments: Links to this post

Being up for grabs in the making

I've been writing Being Up for Grabs, the book, steadily since February. My plan is to have it ready by the end of July. I've finished chapter 4 today and this makes me feel that my plan is still feasible. Last Saturday, walking in Buttes Chaumont, Paris, I restructured the book quite dramatically and got rid of two chapter. Its structure now looks like this:
1. Being up for grabs - the preliminaries
2. Anarcheologies
3. Fragments
4. Doubts
5. Rhythms
6. Contingencies and their galaxies
The idea is to develop another sense of priority, closer to Aristotle's "proton to onton" than to Schaffer's. In this renewed sense, accident is prior. It is widespread and crucial for what is sensible, but it is not its ultimate component, nor what comes first ever. Such other priority can be seen in several different ways, as accident presents itself in different ways too. It is part of its widespread character to present itself with different faces.

Posted by Hilan Bensusan at 08:11 No comments: Links to this post

The day-after of negativity

Been reading the very exciting Society of Tiredness of Byung Chul-Han. He diagnoses that the immunological time has been replaced by a neuronal time - a time of otherness and negativity was replaced by a time of excessive positivity, with open potentialities with scarce limitations. The contrast between the two eras - that of a disciplinary society and that of a society of achievement (or of performance) - is expressed in the prototypical diseases of the two times: in a society of discipline, borders are to be preserved - as is otherness, negativity, duties - and people go down with immunological diseases, infections of all sorts while in a society of achievement, borders spell defeat - people are rather guided by potentiality than duty, by what they can do than by what they should do - and illnesses are depression, deficit of attention, burn-out syndrome. A society of achievement - in a name that he considers fitter than Deleuze's "society of control" which is still too full of negativity - is more convenient for late capitalist production than a society of discipline (but it is not clear whether it can be expanded for the whole of the world working class or if it is a model limited to the expanded cognitariat). The abolition of negativity generates the excesses that cannot be digested - what is refused is the excessive quantity and no longer the insufficiency in quality. As a consequence, people are worn out to the point of becoming over-worked zombies, and all their faculties are all overused.

The alternative to negativity then is hangover. Without negativity there is no will limiting one's capacities. Attention is not guided by anything other than what calls it. Han holds that distributed attention is what wild animals have to have as they often hunt, look for shelter and escape from danger at all times. Concentration - vita contemplativa - is what gives rise to a world of one's own; selective attention that provides a matrix of differences and indifferences. A post-immunological, flat life, invites another ethics, not of alterity, but of refusal. Maybe these are times where there is nothing but what can be done. There is a sense in which we see that whenever there is no will, what can be done seems strikingly little.

Posted by Hilan Bensusan at 11:00 No comments: Links to this post