Beckett predicates questions of life and death as three-penny issues. They invite, as Hegel has shown in detail especially when read under Bataille's eyes, a focus on servitude, on being mastered (or master), on restrictions - in the sense of Bataille's restricted economy. Bataille summarizes the connection by holding that death and pain are agents of servitude - and therefore he urges a greater generality than the one that could be attained by Hegel's Phenomenology. The Phenomenology is stack in the restricted imaginary of life and death, reaching or not reaching what mediation (some kind of servitude) enables, taking commonsense to absolute knowledge or failing to do so. There is a route, a guide - and a single-track guide oriented towards survival (success is measured thereafter). There is no general cartography provided - no general economy.

In the Anarchai group we've been discussing Derrida's piece on Bataille in L'écriture et la difference. Derrida makes clear how Bataille is based on Hegel and departs from him. Bataille inaugurates a thought (and a writing) that is more general than the constraints of servitude through the possibility of death (and life). It is guided by expense: without reserve. Consume it and no servitude will ever shadow your thoughts. I was wondering if Bataille's claim could be understood under the lights of Povinelli's post-carbonic imaginary (her new geontology). Carbon imaginary turns around life and death (and the inanimate and the living) and could be seen therefore as restrict economy. It we are to break with it, we can appeal to what is expending without concern - with no reservations, with no savings. In this Bataille-oriented reading of Povinelly, Gaia is not a living agent or a population of connected organisms but an ecological condition and this can be taken as a spending agent. Gaia is intruded on us as something not passive, but capricious, who can be sovereign and not limited by fear of death (or attachment to life). Gaia is therefore Medea, as Peter Ward has suggested. Gaia would be an ecological condition that is sovereign for it belongs in general economy, and not in the restricted, carbon-based economy of life and death...

Posted by Hilan Bensusan at 13:54 No comments: Links to this post

Gaia and the grey zone

Déborah Danowski and Eduardo Viveiros de Castro wonder, in the best part of a chapter of their Há mundo por vir (Rio: Cultura e Barbárie, 2014), who would compose the two poles of the Humans and Earth-bound in the war to be declared according to Latour (in the Gifford Lectures). One difficulty is the grey zone between victims and perpetrators; like in Primo Levi´s grey zone (in The drawn and the saved) those who don´t collaborate with the perpetrators - the nazi or the destruction of the Earth (and of one´s future) - are unlikely to survive. There are increasingly less complete victims - or rather, there is incresingly less testimonies of the complete victims. To be sure, there are clear-cut culprits and drawned, but there is a big violence in pushing people into the grey zone (which is the grey zone of the society of geocontrol where we are forced into a specific fuelpolitics that makes us part of the depletion of the planet no matter how much we feel attached to it. In the sense that Agamben, inspired by Levi, diagnosed that there are no witness of the Lager, there are no Earthbound, no surviving Earthbound. The grey zone is the zone of survival.

Elizabeth Povinelli makes a brilliant diagnosis: our focus on the split between the inanimate and the living (and our image of life as bound by natality and mortality) is shaped by a carbon-based imaginary. The intrusion of Gaia - a living organism made of ecologically crucial ingredients, as any living organism, such as elements in the soil and in the water - challenges this imaginary. She proposes the idea of an ecological condition, like a hyperobject that can be depleted or enhanced. Gaia would be such an ecological condition. The grey zone where the Humans (all of us) are forced to live is just not enough meta-stable to be an ecological condition. Is this a war? Maybe if it is, it would be a guerrilla where no ground is inadequate.


Posted by Hilan Bensusan at 16:27 No comments: Links to this post

God is often conceived at least as existent, having an essence and having a substance (in the sense of being self-standing). God exists because otherwise there could be no difference God could make on the course of things (apart from differences in our thoughts, as somehow explored by Pascal´s wager). God has an essence for it is this essence that is in question when we wonder whether God exists(necessarily or contingently) or not. God is self-standing because otherwise it would be too dependent to be either omniscient or omnipotent. God is therefore taken to be at least an existing self-standing essence (and therefore could have all sort of special or infinite powers).

Levinas, Meillassoux and Whitehead challenge this common assumptions about God. Levinas has that God as the Other, cannot be taken as an essence, God doesn´t appear to us except as infinity in the sense of an openness.Whitehead challenges that God is self-standing: it depends on what happens in the world - the world writes up its nature - and would be an impossible vacuous actuality - God is an actual entity and not a substance of any kind - if there were no world. Finally, Meillassoux challenges God existence:God doesn´t have to exist to play divine roles - God´s contingent inexistence is enough, that is it is enough for God to be able to exist in the future. Incidentally, these alternatives open new views to the problem of evil. Meillassoux simply does away with it, as the existence of God doesn´t co-exist, as a matter of fact, with any evil. Whitehead takes self-correction as part of the novelty which is a feature of God: the world is always building new things into God. Finally, Levinas connects God with a call, an infinite call, a call beyond any violence.

Posted by Hilan Bensusan at 15:05 No comments: Links to this post

The absolute other of Meillassoux

Been discussing Violence et Métaphysique in the anarchai research group these weeks, I've been growingly convinced that Levinas major (and radical) break with Husserl's phenomenology is somehow recapitulated in Meillassoux's twin rejection of correlationism and subjectalism. Derrida is hard on Levinas when he brings in the notion of alter ego such as it appears in the fifth Cartesian Meditation. Now, that is particularly interesting for me because the fifth Meditation is the official address of Husserl's monadology. He there presents subjects as monads intentionally connected in a way that each monad reaches the others and brings them in while maintaining them away - they are heard because they are egos, they are away because they are alter. An intentional act brings the intended other in by making it possible for the subject to register in thinking the presence of the other. The monadological relation makes up for a structure of intersubjectivity - the other appears to me as an other which is intelligible to me as another me. Then Derrida goes: this is the best one can possibly require from a structure of intersubjectivity - the other as another me; nothing could possibly be less violent than that and yet making sure that intelligibility is made of the other (and the philosophical discourse on the other is not cracked open). Yet, Levinas is deeply unhappy with Husserl's alter ego - as he would be, as it were, with any monadological approach whatsoever. He thinks that considering the other as another me is already closing oneself up to the other - and making an ontological claim that cannot bring in anything but a violent staring point. It is a way to make my intelligibility rule over what should come first, the alterarchy - the command coming from the other. The Husserlian alter ego is just not enough to bring in an opening to an absolute other - it is, in a sense, tainted with a correlation, with my own matrix of intelligibility. Derrida sees the drama: it is not enough and yet it has to be enough. By insisting on the first part, Levinas cracks open the philosophical discourse on the other. Derrida makes it even clearer: without something like a Husserlian monadology, violence against the other has no victim, as the other is not clearly an ego that can be victim of violence (or alternatively, violence has no perpetrator, from the point of view of the other). Cracking open the philosophical discourse on the other is therefore incoherent and arguably dangerously close of being unintelligible, Derrida diagnoses, and yet, he registers, Levinas goes precisely this way. And in this he is radical: intelligibility is not something one should sacrifice ethics for. He breaks therefore with the correlation intelligibility (and with the subjectalism of Husserl) by insisting on an infinite, on an absolute opening, on an absolute other.

Now, Meillassoux seems to be doing a similar move. It is not sufficient to make my intelligibility (or any one's intelligibility) the measure of all things - mediation, or correlation, cannot be made absolute because the price to pay is to taint the absolute character of the other. If correlation is absolute, the other can no longer be presented in its absolute character. To break with subjectalism could be to crack open philosophical discourse about the world, but this is the radical move: get away from any promise to make the world intelligible so that its character of absolute other can appear. Philosophical discourse is, in both cases, the eventual casualty.

Posted by Hilan Bensusan at 20:10 No comments: Links to this post

The Festschrift for the 80 years of Oswaldo Porchat is now out. Porchat is a very inspiring philosopher who knows how to agree and disagree in the same welcoming tonality. The book is organized by Plinio Smith and carries an essay of mine on Neopyrrhonism and the ontology of doubts. 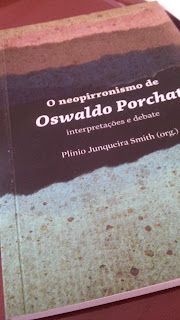 Posted by Hilan Bensusan at 11:43 No comments: Links to this post