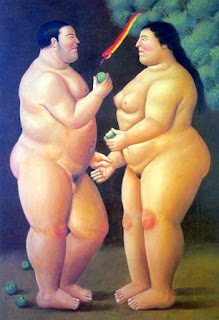 Amirouche Moktefi posts an interesting question in a list: is there any representation of Adam navelless?

An interesting element in (some) creationist credos is that God created the past together with the rest of the present world (so that human's faith, presumably, could be tested - or teased as it was). So fossils of older animals and remnants of plants and rocks were allocated in the planet about 5775 years ago so that an impression of ancestry could be provided - and the real believers would stick to the right path in spite of all recalcitrant evidence. The virtue praised here is being stubborn, loyal to a credo come what may. The means, however, are interesting: recreating the vestiges of the past. I wonder whether all tales of origins aren't always doing the same: building an original past that exorcises vestiges as meaningless (but somehow important to be present). It is as if the marks of past repetition are just not real (just marks of a rehearsal, a répétition). This is maybe because origins are imposed as a force that shakes everything else.

Adam's (and Eve's) navel is the best example. Botero makes both naveled. God probably wanted to tease our faith in the creation by making those first humans with navels provided. There is no ancestry, but there are marks of an ancestor. Humans are created with their ancestry, with their past. A creation is a construction and therefore it is real: after 1864 the germs have been around since ever, has a boutade by Latour in Pandora's Hope. In any case, this is the power of creation: a human has a navel. To be sure, some images, like Klimkovics's, opt to hide the navel area - yet making them sufficiently human-looking. It feels like Adam was supposed to be a prototype, a prototype of a person - and a person has ancestry. But then, ancestry has to be invented. 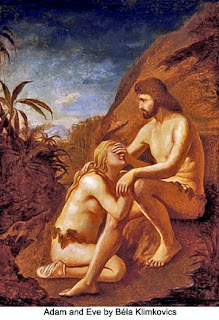