Salanskis, transparency and the Other

May 13, 2018
I have been connecting Meillassoux's criticism of the metaphysics of subjectivity (or subjectalism) that takes it to be committed to the absolute character of the correlation with the criticism of the transparency of reality. Under these lights, Harman's outright rejection of transparency (as much as Meillassoux's) would not qualify as a metaphysics of subjectivity for there is a real object that places reality away from what is transparent. On the other hand, I started suspecting that when the bifurcation that Whitehead denounced - the one between experience and nature, between our image of the world built from our experience and what is real - is rejected, one is heading towards assuming reality is transparent and this is enough to lead to a metaphysics of subjectivity. Further, I even suspected that maybe any thorough ontology of events such as Whitehead's - a commitment to the idea that events and not objects and their qualities are the main constituents of everything and therefore that experience takes place within the space of events and so within reality - is already subject to the charge of a metaphysics of transparency and of an assumption of transparency. It is as if to take the rejection of bifurcation seriously is already to commit to a transparent reality and to the absolute character of the correlation - and that nothing could transcend the correlation.

I would like to reject that because my metaphysics of the other makes transcendence of appearances possible through interruption (of the other). The correlation is challenged by the other that could appear from everywhere. Yet, I don't see it committed to the bifurcation - it is not that there is a ready made realm (reality itself) owned by the other - the other appears within experience, within our horizon and not outside it in a foreign country independent that exists somewhere else.

On his presentation of the ethanalysis of truth, Jean Michel Salanskis last Friday said that mathematics had a strange connection to truth. He considers that truth attends to these four prescriptions (among others): 1. See being as a stranger; 2. Take what is to be known from outside the limits of being; 3. Host the foreign being as a master of study and 4. Think and elaborate an identity for the knowledge of the being that is hosted (see image, if legible at all). He further claims that mathematics is at odds with 1 and 2 (but comfortable with 3 and 4). I asked him exactly why. He then said that the object of mathematics is within the pole of the subject in the subject-object divide that he thinks is itself a commandment of truth. Mathematics is in the pole of the subject because it belongs in language. To be sure, he agreed, there are surprises in mathematics. But the beings appearing there are not outside the realm of the subject. It seems to me than there he is assuming the bifurcation: that in other cases - in physics or in the knowledge of shoes for example - there is a difference between a realm of the other and what is native to the subject.

I take my project of a metaphysics of the other brings together some ideas of Levinas concerning the absolute exteriority within a general framework where there is no bifurcation (i.e. a general framework akin to Whitehead's account of experience). Instead of drawing a fixed border for what is outside the native land of experience - as if the stranger were confined to foreign lands - I accept the exorcism of bifurcation and hold that the other exterior to me is at the same time commensurate with my experience. What is exterior is not exterior from my experience, rather it is within it - the other is an exterior element within the confines of my experience, that could be understood within it but is (currently) not. To accept bifurcation is to accept a view of totality where the other is placed somewhere outside experience. (On my reading, there is a discontinuity between Levinas's attention to the other that can never be phenomenological and Meillassoux's endorsement of an absolute placed outside to the correlation.) Still, I don't know how to best characterize this interrupted experience I'm talking about. For instance, I'm not sure events should constitute the preferred framework to describe experience (and to make sense of interruption). 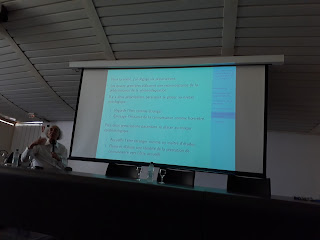