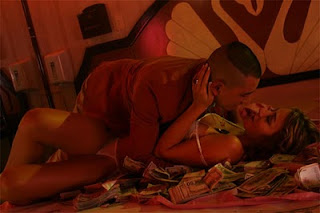 When I think about pure potentiality, an image that comes to my head is money. Enough to think about Rodrigo Triana's 2006 flick, "Soñar no cuesta nada". A bunch of soldiers uncover packets and packets of cash and that was a trigger for many dreams. Dreams are departures from the existing, they are believable because they are possible - potentially existing. In any case, money incarnate potentiality that didn't turn into anything yet. (The actualist, by the way, could have problems understanding the value of money as such.)

The idea of matter is that of something that has no more than a one dimension limitation: that of its quantity. Matter is supposed to be independent from any form as form is the intellect that shapes it. (Venkatachalapaty remarked last week on my Madras talk on tantric ontology that potentiality would also needs a guiding intellect, therefore something to shape it; otherwise, it lacks any quality). Surely one can find things common to the mobile phone by my side and the potato I'm eating - for instance, electrons. They can even be responsible for some of the dispositional properties matter display; that is, material things qua material things. However, this would not entail that matter is the ultimate repository of both potentiality and passivity as by itself it doesn't act. In fact, the idea that something holds a pure potentiality - as much as the idea that something is purely contingent and therefore independent on anything else - is a bad starting point for a metaphysics. Matters, as Jane Bennett would put, vibrate, tremble, have capacities, lack resources, make alliances and enjoy their particular matrix of speed. There is no such thing as the servant waiting for orders. Matter is a product of a fascist metaphysical imagination, as I once put (in E&E).

Materiality has all sorts of implications and the idea is probably deeply entrenched in current western thought. (It's sexuality has been debunked by Butler when she points out how the idea of matter is also hostage to a specific sexuality - in the first chapter of "Bodies that Matter". Guided by some Irigarayan intuitions, she links it to the erotics of domination.) Matter has also its economics. Today I thought matter not being readily available, someone had to somehow invent it: the erotics of money. Money is the best approximation of matter. In fact, when we think of things made of matter, we think in terms of investment. Money comes in from one source and then somebody does something with that raw material (the wealth that carries no smell). That's the economic result of our ontological (materialist) imagination: wealth should be understood as having no form, it is pure flux, has no shape, no bound, no boundaries, no territory. Money is always flirting with virtuality. That's maybe the economics of materialism: the economics of the money buying everything because there is a common denominator to everything. That's why the ultimate possession one has is money (and capital). And the usual substrata posited for things lie in their material constitution.

Capital, ever flowing and rarely getting stuck, goes around with its becoming matter. Of course, it doesn't buy the hunger of a wild animal. But it buys a fence to keep it off.

It could be useful to fully imagine the world without matter.