December 12, 2012
Been launching our book on anarcheology of Heraclitus` polemos. Our notion of anarcheology is associated to thought without archés - it is connected with freeing philosophy from the facts of its history. Zouzi Chebbi once connected anarcheology to his remark that to the south of the Maghreb there is no distinction between fact and version. The jounalist who interviewed us about the book defined it as a mix between anarchy and archeology. We meant to make a gesture concerning the original Heraclitus in the book: philosophy is not a slave of the genuine, authentic Heraclitus. Aharon Link recently pointed out to me that anarcheology is also understood as the militant study of the absence of archy, of government. In fact, this multiplicity of meanings is welcome, it has to do with the intimate connection between ontology and politics, for instance, in the term arché.

But I thought anarcheology, in our sense, can be linked to an understanding of virtual history. Or rather, virtual bibliography. A history of philosophy that could have happened but didn't. An attractor that didn't become a trajectory, something like this. Because thinking deals in the virtual - in what could have happened but didn't. There
are thoughts that could have put forward and could have had consequences of all kinds but didn't become actual. Virtuality has a resemblance to what is at stake in the principle of sufficient reason. Thinking is virtual in the sense that it is there but it depends on everything else - its actualization is not un-hinged, it is not unconditional. Anarcheology is an archeology of the virtual - we extract from what can be thought about the polemos, for example, text. Deleuze, thinking about the several ways to formulate problems, comes up with the idea of an empiricism of the virtual. If such idea makes sense, we can take anarcheology to be the realm of discovery within the vritual. 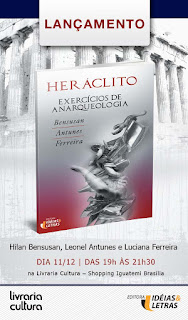