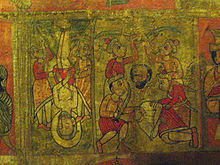 Imogen Reed wrote to me kindly offering a piece of writing to this blog. I suggested him to write something on Skendes, the Ethiopian philosopher, which he promptly did. Skendes´life and his decision for silence as a punishment self-inflicted for having fooled his mother and cause her to suicide through his speech calls my attention. It could also be seen as yet another slant on the Oedipus narrative. Plus, his silence - his oral quietism - probably influenced the image of a philosopher - or of a wise person - in some parts of the world.

I was reading some of the questions and answers of Skendes book. Question 18 is about the ocean and he connects it with a womb. Not a surprising connection (with even an evolutionary ring to it). It made me think of the recursive element here: the womb is a generator of all that exist - "the whole world is in its womb" - and yet it is exists. The womb is not outside the world as the monads are not outside matter. Ontogenesis is part of ontology. It is not outside it like we think of abstraction. It can even be thought as an object amidst others, but it can also be a repository of matter ("it has no boundaries", writes Skendes) that germinates future bodies as it acts as unemployed matter. Unemployment is what points at what is yet to be a job - unregistered production. The ocean - or the womb - is made of what is going to exist or, rather, is going to be made of what exists.

I include below part of the text on Skendes sent by Imogen:

The much celebrated story of Skendes an ancient philosopher has occupied the storytelling generations of Greek, Syrian, Arabic and Ethiopian scholars over centuries. It has been argued between Arabic, Greek and Ethiopian who the text is based on – with the Ethiopian text based on Arabic and yet some scholars state it is stylized on the Greek people. The story itself as the Ethiopian version goes tells of Skendes, son of shrewd parents, wanting the best education for their son, that decided to send him for a classical education to Berytus (Beirut) and Athens. At the time Skendes left for this scholarly mission he was just thirteen years old.

Whilst abroad Skendes was exposed to the thoughts of so called wise philosophers who told him “All women are prostitutes”. Determined to test this theory after staying away for twenty four years he returned to his former home country and decided to test his own mother. By tricking a maid into letting him into his mother's house he ended up spending the night with his own mother. Upon revealing himself as her son she was so appalled by the discovery that she hung herself.

As a punishment for allowing his tongue to ultimately cause his own mother's death via his deceitful means Skendes made a vow never to speak again. From that moment on he remained mute as a penance for speaking at all.

At the time the emperor was Andryanos – upon hearing of Skendes' unusual story he invited him to his court. Instead of speaking his thoughts when ordered to he wrote them down. As a result Emperor Andryanos communicated back to him through writing with his responses being organised into two sections.

The first section contained fifty-five sections and the second, one hundred and eight questions. Skendes developed theories in answer to these questions, all about the essence of God, the angels, man, the world, the sun, moon, stars, sky, clouds and earth as well as the mind, the spirit, the winds, thunder, the air, the ocean, the soul, man and woman. After the emperor listened with great care to what Skendes was saying (writing) he was acutely impressed and did not again order the philosopher to speak. Instead he officially declared that Skendes by treated as a national treasure and be preserved in the priests' archives.