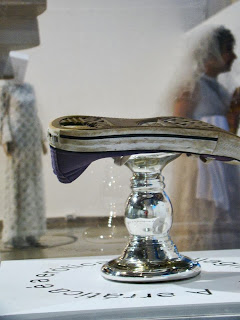 The erotics of allagmatics is erratic (from my exhibit Two Objects in the Object Oriented Exhibition 2, open until the end of the month in Brasilia, Galeria Espaço Piloto).

Individuation. Whatever makes an individual an individual. To give an account of it, one can appeal to primitive individuals (atomism, monism) or to selected substantial individuals (like Aristotle). Aristotle seems to connect individuals to substances - the mutilated, for instance, in Metaphysics, Delta, 27 - and hence some individuation is no more than derivative. Derivative individuation is such that the operation (the alagma, the cost of transport) that produces the individual is made invisible in favor of pre-existing principles of individuation. Substances guide individual from outside the workshop of things - from outside the processes of individuation. They act like form and matter. Simondon wants to shift the attention to the underlying process of individuation that is to be found connected to any individual. Individuals are not ready-made. Not even derivative ones. (Simondon stresses the difficulties that both monists and pluralists - his examples involve Spinoza and the Stoicists for the former and Leibniz and Epicurism for the latter - have to individuate derivative items, those that are not substantial. They end up presenting them as created by an external intervention.)

Now, an object-oriented ontology is perhaps an ontology of substrata without substances. Objects have an hypokeimenon but as ontology is flat, there are no derivative individuals. There is no problem with given individuals as everything can be taken as an object. The object-oriented approach can therefore avoid Simondon's charge against substantialism that takes it to be unable to individuate. Objects are individuated, one by one. None is derivative. The allagmatics, to be sure, is to some extent still made invisible as ontology still is about individuals. But individuation can be explained through objects - objects individuate objects. Whenever there is something, there is an object. No privilege of relations but also no privilege of substances. In that sense, it can face Simondon and makes him concentrate his fire against non-substantial and still somehow born individuated individuals.