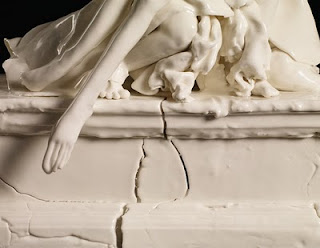 I reckon the post-humanist ways of thinking that where ushered in by structuralism and carried on through the efforts to explore the thought of difference have reshaped the correlationism question. It became clear that it is the burden of the correlationist to show that there is a unified (human) thought that is in the most central correlation with the world. Thought is spread in many directions and has to do with alliances and becomings that are build up from contact rather than from an underlying structure. Thought is fragmented - my thought has to do with my body, my gestures, my landscapes, my speeds, my habits. The image is more Nietzschean or, rather, inspired by a Nietzschean reading of Humean contingency.

Even if we grant that concepts have a grip on our thinking and therefore act as unifying force gathering together every instance of thought, we have not yet established that this centripetal force rules unchallenged. In fact, concepts are likely to be contaminated by all forms of specificities - they have, as I once wrote, accents. So, a concept in the head of a Willard, the rat man, is bound to have repercussions it wouldn't have in the head of a ballerina. There is no singular for correlations between thought and world. Further, all kinds of naturalistic efforts to bring thought closer to other engagements with things (and other devices that feed and promote relations) lead in the direction of showing that there is no privileged, unified us that instantiate thinking subject.

Maybe we want to grant the right of the correlationist to go one further in the Platonist scale. Note how easy it is for correlationism to go up those stairs, as Kant himself makes clear by relying on a distinction between empirical and transcendental subjects where the former are thought of an example, or as something that somehow is in metexis with the latter. Meillassoux himself makes clear that the correlationist becomes harder to deal with if a greater degree of Platonism is assumed. His ancestrality argument would be easily rebutted by correlationists that could help themselves to large portions of Platonism. Well, if we want to say that there is thought independently of any instance of thought and we just exemplify it, we would have troubles having a clear idea of what is this common denominator.

Correlationism, it looks like, is a scheme of a thought. Without a strong humanist metaphysics (of the subject), it may become very hard to flesh it up. More on this later.