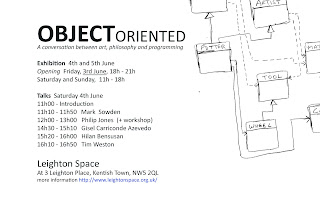 OBJECTORIENTED
We are a group of artists, philosophers and programmers who have been meeting up to share our thoughts on art objects, object oriented programming and object oriented metaphysics.

The event we are organizing at Leighton Space combines an exhibition, talks and one workshop; we would like it to be an informal forum to reflect on the many ways objects can be perceived, used, made, thought and studied.

Phil Jones has been a musician and software developer for nearly 20 years. As the former, he's composed music to accompany ballet, poetry recitals and gallery exhibitions, as well as exploring a number of interactive compositional toys. As the latter he's developed everything from social networks for social entrepreneurs, through industrial scale materials management software for Brazilian pharmacies, to desktop applications in Java. Phil is now a full time student on the MFA in Computational Studio Arts at Goldsmiths College, University of London. ( http://www.synaesmedia.net)
Hilan Bensusan I am a Brazilian philosopher and artist currently between Paris - lecturing at the University of Paris 8 - and London. My current interests revolve around fragments and composition, both as a topic for my philosophical thinking and as a guide for my art research. I have worked with video and performance touching topics such as orientation, queer bodies and decomposition. In the last years I've been developing ways to put together philosophy and performance, mostly by combining the performing gesture with the philosophical talk. I'm currently exploring ways in which we can view objects as being themselves performers. ( http://anarchai.blogspot.com/)
Tim Weston He was born from the loins of a woman not long after a time of great strife. All too soon his instincts were tamed and tarnished by the educational system. He fell into work and later, much later, woke again. Now he spends his time trying to be an object among objects. As a means to this end, he has adopted the process of art, hoping that by paying close attention to the objects he draws and paints, they will consent to admit him to their flock or fold. (Tim is a part-time student on the Art Doctorate ,UEL)
Mark Sowden studied Fine Art at North East London and Manchester Polytechnic in the mid 1980's. He has continued to make art since graduating while working part time as a workshop Technical Demonstrator at University of East London. Using photography, sculpture and drawing, his practice is rooted in an understanding of the potential of process to examine and manipulate the physical environment he lives in. Using what is near at hand he uses process to transform objects to a point at which their identity is on the point of dissolution.
Gisel Carriconde Azevedo I am a Brazilian artist currently doing a professional doctorate in Fine Arts, at the University of East London. In the last few years, I have been working with installations which involve appropriation of cultural references, mainly from art history and museums. As sculpture have become more central to my practice, I have become interested in what makes an object into an art object. (http://www.giselcarricondeazevedo.com)